AutoCAD - A Handbook for Theatre Users 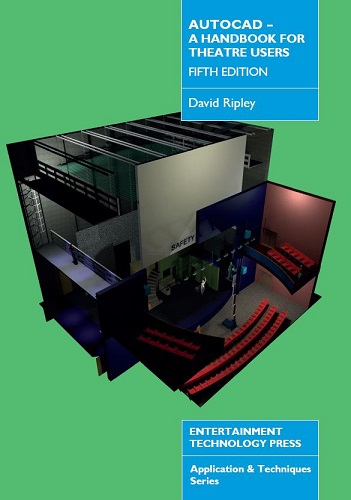 The first edition was published by ET Press in January of 2005. After much struggling with how to approach it, I eventually hit upon one large project running throughout the book.

I selected the creation of a Groundplan and 3D rendering of a fictional theatre. By this method most of the techniques required are covered in a theatrical context that people should be to relate to
Exercises and examples throughout the book help the reader monitor their progress in using AutoCAD. Releases up to 2004 are covered in the first edition.

In September 2021 the 5th Edition was published. This is based around AutoCAD 2022 and updates many of the tools from previous editions. As AutoCAD has become more about online collaboration there is a large section on these new options and apps

Reviews for the first edition

His book will in fact prove useful to anyone learning AutoCAD, in any number of disciplines, well-written, concise and easy to understand - LSI Online

I no longer sell the book directly, frankly, it’s too much hassle, so please contact ET Books if you want it. The accompanying files to use with the Handbook are in the Downloads section

In December 2009 I wrote a 2 part article on using CAD in live theatre. AUGI (Autodesk Users Group International) represents all sorts of users of Autodesk programmes, so a lot of the article is about explaining how theatre works.

I contributed sections on a variety of CAD and visualisation programs for the second edition of Skip Mort’s Stage Lighting: The Technicians Guide in 2011.

Most recently I joined with Tom White of VectorWorks on a joint presentation for the ABTT during the Lockdown. It can still be seen here